This page lists some additional and user-made scripts, shaders and extensions that can help you in specific scenarios, as well as other big assets which have interoperability with Bakery.

The Better Lit shader is an improved Lit shader which runs across all render pipelines, and offers a number of multi-layer and procedural techniques to texturing. Supports all Bakery shader features out of the box.

Want to write shaders that are compatible with the render pipeline without being forced to use a shader graph? Better Shaders makes that a viable option. Supports all Bakery shader features out of the box.

Updated ASE shaders for URP, with SH lightmap and Volume support (with specular) by Not_Lonely: 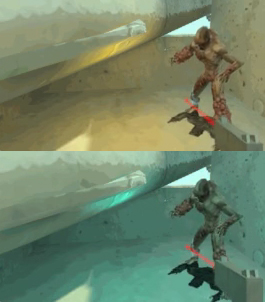 - Put this script onto the root of your lightmap group.

- Assign a new lightmap to the New Lightmap slot.

- Assign Lightprobe Storage to the Lp Storage slot (if you have one).

- Press Apply New Lightmap. Script will try to find a mesh with a valid lightmap index and use this index to swap an original lightmap with the new one.

Created for use with multi-scene lightmap baking (Unity tends to store LightProbes data in a wrong Lighting Asset, thus making your lightprobes completely black upon loading the project) and runtime lightmap/lightprobe swapping (like turning lights on and off). Put this script onto LightProbeGroup you want to save and press Grab Harmonics after baking the Lightprobes. To restore saved probes, press Apply Harmonics or enable one of applyHarmonicsOnEnable/applyHarmonicsOnStart options and start the game. If for some reason you get warning "Can't find harmonics #X", then set precision slider to 0.02 and press button again - this should help. 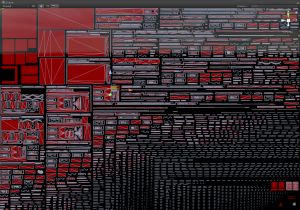 A small suite of debugging tools I use for development. Adds some new options to Bakery menu:

This tool adds "Bakery/Utilities/New mesh asset with vertex color" menu option that'll generate a new complete mesh asset out of every selected GameObject having MeshRenderer/MeshFilter. These can be then used with batching. 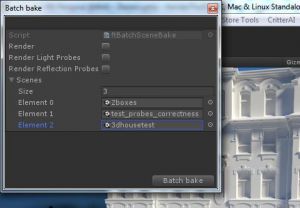 Script to automatically bake multiple scenes, one by one (lightmaps, light probes and reflection probes). All dialog boxes during the bake will be suppressed.